In the summer I started this wool work cushion cover and at last I have finished it! I temporarily lost the bag of wool but found it and completed the stitching this weekend. It was inspired by seeing a lot of folk art in Sweden though not copied from anything directly, in fact I made it up as I went along which is my usual way of working. It will become a cushion cover though what possessed me to work on to a dark colour when I have a white cat I do not know. I had forgotten how nice it was to work with wool on wool and it has made me think I must definitely repeat my Wool Work course this Autumn. 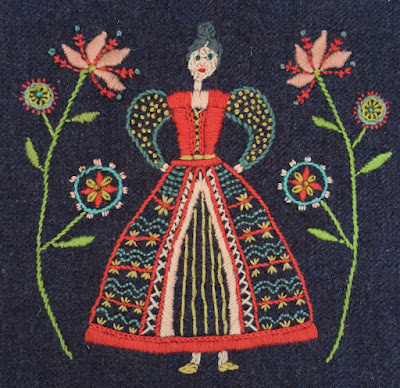 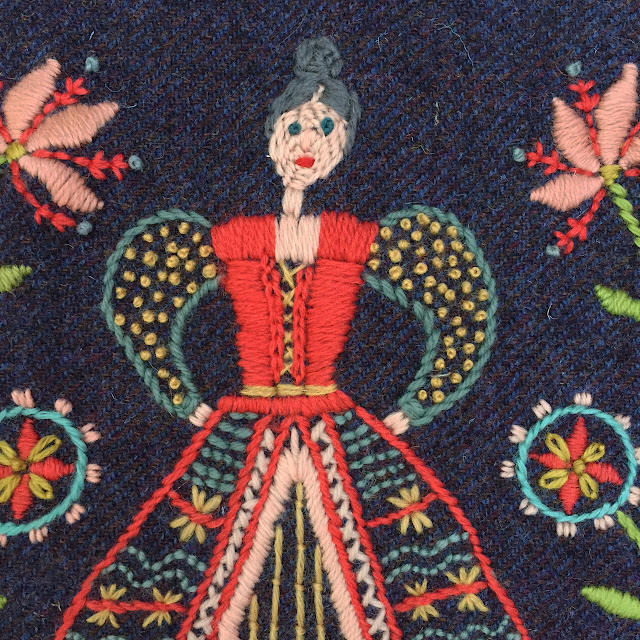 Posted by Mandy Pattullo at 11:04 No comments:

Someone has cancelled their place on my Stitch course on Tuesday March 14th. Please contact me through my web site if you are interested.
This is for 4 people only in my studio so rather special
Many people have asked me to repeat this workshop where you will go back to basics and learn about 30 embroidery stitches in a day and will leave confident that you can apply them to other projects.
This day will be devoted to learning,exploring and revisiting common hand stitches. Each group of stitches will be demonstrated and you will build up a small sample collection which by the end of the day you will be able to make in to your own little "Stitch Bible". I will also show you examples of the way stitches can further be developed and stretched after the course. You will be able to choose do your samplers on to old starched table linen, or pieces of wool blanket and a small piece of quilt will be used as a cover for your book. This is for beginners or those who are a bit rusty and want to be reminded . 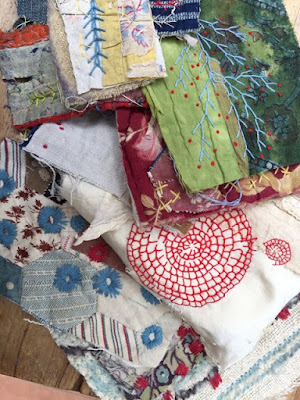 Posted by Mandy Pattullo at 09:31 No comments:

Just updated my website with some new courses for the summer months. Check them out HERE 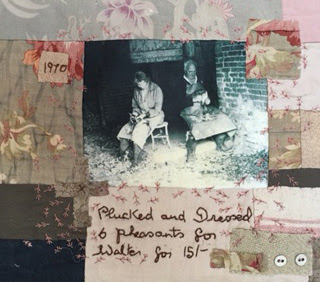 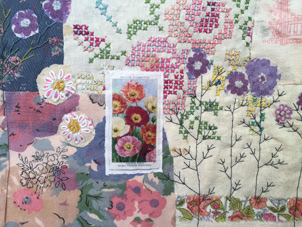 Posted by Mandy Pattullo at 08:03 No comments: 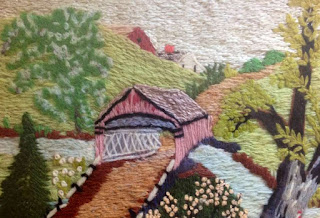 Grandmas Moses also fitted in a little embroidery on the side. A blog reader has forwarded me this link which you might like to look at.
http://www.timesunion.com/local/article/A-rare-sight-Grandma-Moses-Old-Bennington-4843299.php.
She gave up on stitching because of arthritis and then turned to painting. The little embroidered picture reminds me of The Bridges Of Madison Country which is a film I used to love. I am wise enough now to know that it is unlikely that Clint Eastwood will turn up in your kitchen!

Posted by Mandy Pattullo at 10:03 No comments:

The Sun Has Gone Down

At last we have a little bit of snow in the North East. So pretty and even better that  I don't have to drive anywhere today as my little grandson is coming to play!. Here is a  piece I have made on a snowy theme which was inspired by Grandma Moses's painting "The Sun Has Gone Down". I wanted to capture the spirit of the painting while not copying it exactly. 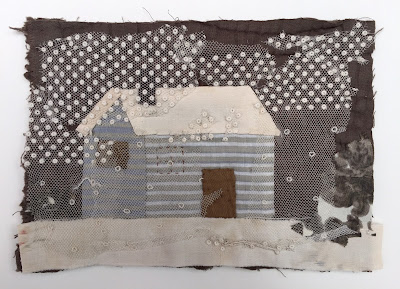 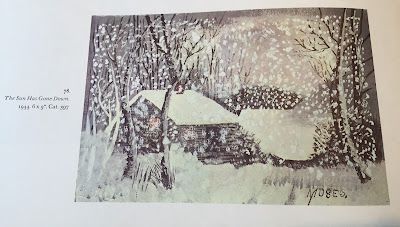 Posted by Mandy Pattullo at 02:36 No comments:

Many of the old quilts that come to me are barely there and I have to patch on to the top of them to keep them together. This is the tradition of generations of women who patched over patchwork to make things last longer. I am afraid my pieces are not functional but just pretty things to hang on the wall but I love knowing that little bits of the stories pass in to others hands. I don't usually sell my more abstract pieces but in 2017 I am going to let more go so am putting it over on ETSY now. 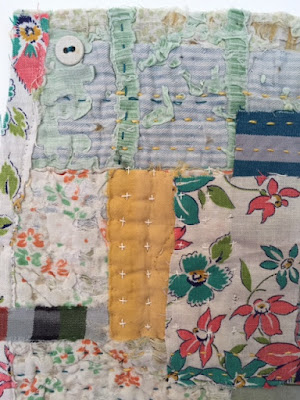 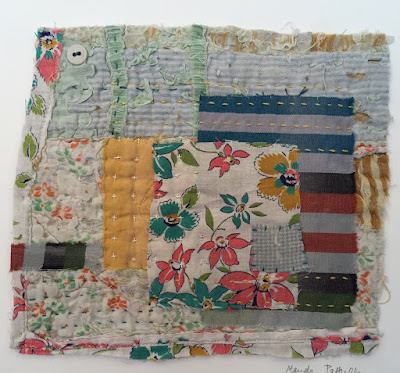 Posted by Mandy Pattullo at 06:39 No comments:

I am featured in two magazines  in the UK this month. Both have done 4 page features on me and my work with lots of good pictures too. If you do see them you will see that in one I have dark hair and in the second I look blonde. This is because when I became a grandmother last year I decided to stop the dyeing. Still not sure as I go in to 2017 though whether I may revert to my dark haired persona again!
Thank you to Amanda Ogden who did the feature in Popular Patchwork. She is a fellow textile artist and we have known each other  for years.
The magazines are Popular Patchwork January 2017 and Cross Stitch Collections January 2017. I don't do Cross Stitch but something in my work must have captured their attention. 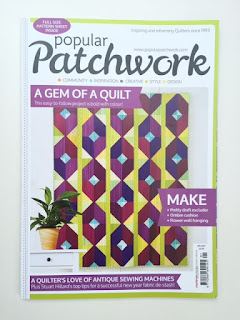 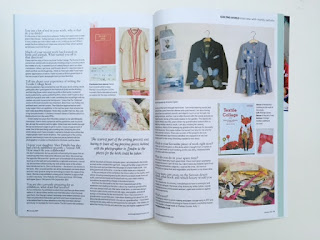 Posted by Mandy Pattullo at 09:42 No comments:

A few spare hours over the seasonal break has given me the chance to develop a few new lines for the Etsy shop. I love finches so here are a greenfinch, goldfinch and bullfinch. 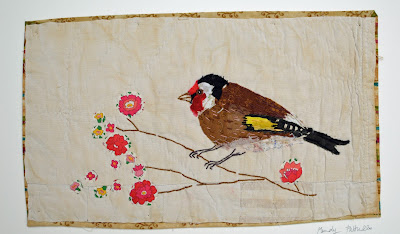 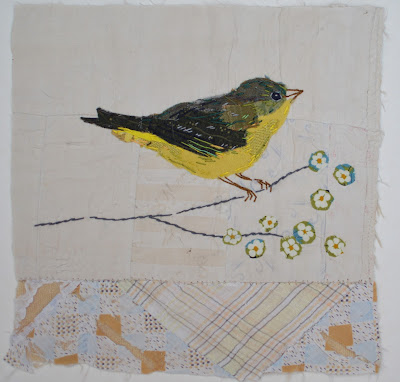 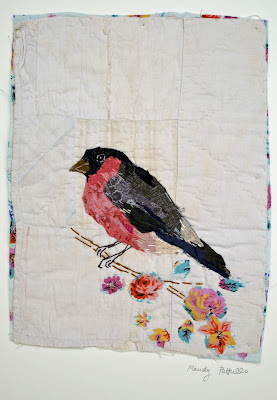 Posted by Mandy Pattullo at 13:37 No comments:

Thanks to all of you have told me about "clocking". They appear to be embroidered motifs around the ankle area of stockings.
Thank you to those readers who supplied   a couple of good links here about stockings and the motifs here
http://www.mfa.org/collections/object/pair-of-infants-stockings-121440

I googled images of early nineteenth century stockings and found many good pics there too if any of you want to follow it up further.

Posted by Mandy Pattullo at 10:59 No comments:

I was given this old book for Christmas. It was first published in 1915 and this edition is 1948. Over the last 10 years I have fairly regularly made quilted petticoats / skirts using old quilts and my original inspiration was the quilted skirts worn by women connected with the fishing industry here on the north east coast of England. There are few references to quilted petticoats in any books so  I was interested to read in this book two storiesI did not have any knowledge of. In one chapter Webster tells of runaway slaves being identified by their petticoats and later on she talks of women from Holland who settled in the USA and who wore short quilted petticoats all the better to show off their high heels and coloured hose with scarlet "clockings" ( no I don't know what this means!). I would love to see some photographs of these transplanted Hollanders in their quilted skirts and fine stockings if anyone can lead me to any archive photographs. 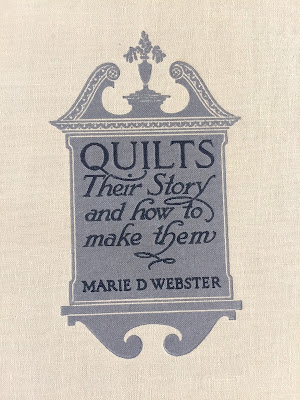 Here are some photographs of some of my own quilted skirts. You may have seen them before and they are featured in my book "Textile Collage". 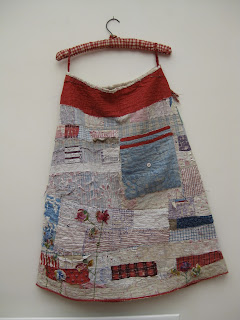 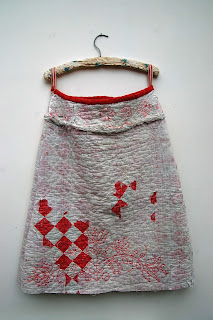 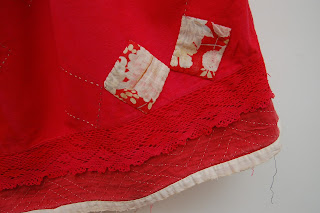 Posted by Mandy Pattullo at 09:00 No comments: