There is currently a very good quilt exhibition called 'Seeing Red; the influence of Turkey Red Dye on Quiltmaking' at the Quilt Museum , York until 23rd December. ( www.quiltmuseum.org.uk)
I made these pieces about a year ago for a Designed and Made Show called " Inspired Flaws" and they feature parts of a Turkey red strippy quilt which was well past its sell by date.
As the quilt had become more worn with use it had revealed hidden layers of fabrics which had been covered  and patched up. Every piece of fabric suggested the story of relationships as I found pieces of men’s shirting, of blankets, of indian printed dress fabrics. It was constructed in a  culture of “make do and mend” to which we will surely have to return in these straightened times. I  had to make a real connection to this textile piece in unpicking another woman’s stitches, darning and patching in order to  refashion the quilt into contemporary garment shapes in homage to the scraps  and dressmaking leftovers which were used to make the original quilt. 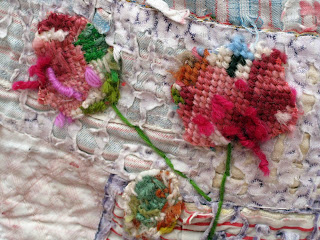 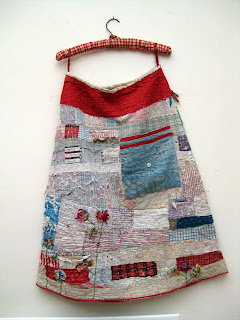 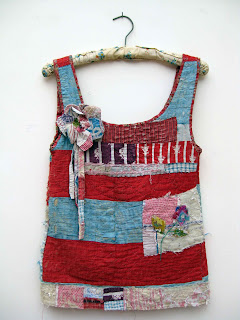